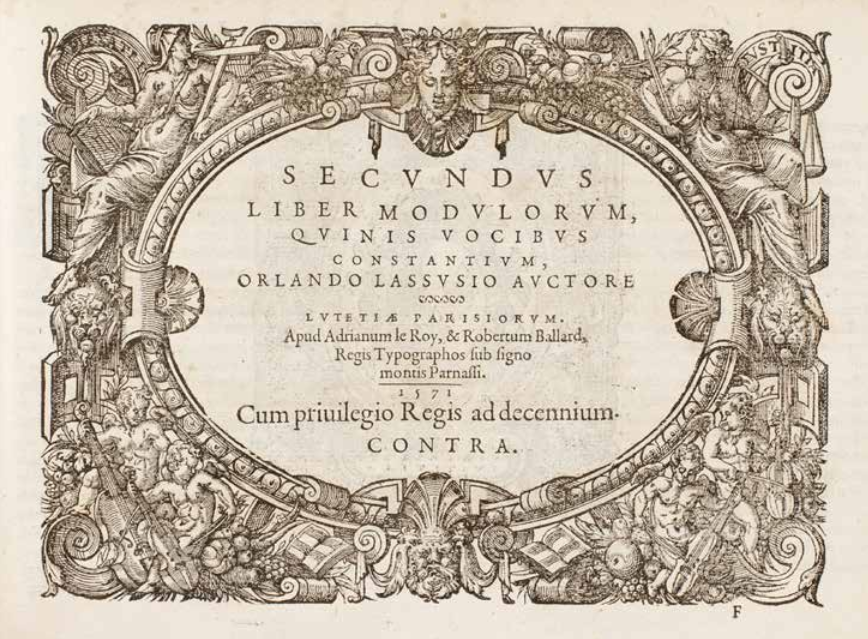 We are pleased to share this article, which originally appeared in the Friends of the Princeton University Library Winter 2015/2016 Newsletter, about an acquisition by Princeton University with which we were involved. We're delighted this material has found such a wonderful home.

The original article, starting on p. 18, can be found here.

At the end of May 2015, the generous support of the Friends enabled the Princeton University Library to respond quickly to an offer from the music antiquarian firm J. & J. Lubrano to purchase seven extremely rare printed partbooks of polyphonic sacred music composed by Orlando di Lasso (1532–1594) and published between 1571 and 1576 by the Parisian firm Adrian le Roy & Robert Ballard. Lasso (also known as Orlande de Lassus) was by far the most widely known and admired composer of his age. His creative genius was on a par with that of other masters from the second half of the 16th century, including Italy’s Giovanni Pierluigi da Palestrina, Spain’s Tomas Luis de Victoria, and England’s William Byrd.

Born in the Flemish city of Mons, Lasso spent his formative years as court singer and composer in Italy, obtaining the important post of choirmaster (Maestro di Cappella) at Rome’s St. John Lateran at the remarkably young age of 21. The illness of his parents forced him to return to Antwerp by 1555, where he began publishing numerous collections of secular music, including Italian madrigals issued by Gardano in Venice. In 1556, he was invited to become a singer at the Bavarian court of Duke Albrecht V in Munich, and within a few years Lasso was appointed chapel master of the court’s musical establishment. He was now an internationally famous composer and would be continuously lavished with honors by the Bavarian and Hapsburg nobility during his long tenure in this position.

A remarkably prolific and versatile composer, Lasso excelled in writing secular and sacred music in all genres and many languages. Within his enormous output of works extant in manuscript and printed sources, the large body of sacred motets are among his most outstanding compositions. Eager to profit from the composer’s fame and the growing demand for copies of his works, the Parisian publishing house of Le Roy & Ballard issued numerous editions of Lasso’s works from the mid-1560s through the 1580s. Among these, their compilations of Lasso’s motets are milestones of musical publication, representing some of the most polished productions of music printing of the age. These editions—of which the Library’s seven acquisitions are prime examples—reflect the renown already achieved by the composer and are marked by expert setting of the musical type, elaborate woodcut borders, engravings of Lasso, fine historiated initials, and many other typographical features reflecting the craft of the venerable Le Roy & Ballard publishing house. Thus, these are not only outstanding primary resources for the music they transmit, but they also represent exquisite examples of music printing from the second half of the 16th century during a rapidly expanding commercial market for music publications.

Polyphonic music from this period was not issued in modern-day score format, which shows all the voices simultaneously; rather, it appeared in choir book format or more commonly in sets of partbooks, each devoted to one of the sounding voices, such as alto, tenor, or bass. Singers at the time would perform from their respective partbooks to recreate the polyphonic work in performance—in four or five voices, for example—without ever seeing all the parts aligned, as is the case with modern choral scores.

Over time, the separate volumes of voice parts issued for a single composition were largely dispersed, with all volumes rarely surviving together and complete sets extant today in only a few library collections. Imprints for which complete sets do not survive in any one location have required scholars to cobble together partbooks held by various libraries to create a virtual set for an edition in modern score notation. Further complicating the process are the inevitable changes or corrections made during the pressruns of the partbooks, which suggest the likelihood of differences among duplicate partbooks; that is, copies of the same tenor partbook in three different libraries could contain significant variant readings. Individual partbooks (and of course complete sets) from the 16th century are rare, especially in American libraries, and are growing increasingly difficult to locate and purchase on the antiquarian market. Thus the purchase of these seven Lasso partbooks was particularly fortuitous.

In addition to being extremely rare and gorgeous examples of music printing from the 1570s, these partbooks share a distinguished provenance, stemming (by way of auction purchase by Lubrano) from the recently dispersed collection of the renowned Parisian collector André Meyer (1884–1974). Over a period of some 70 years, Meyer amassed one of the most important privately held collections of antiquarian printed music in Europe. These partbooks now join the growing collection of early music imprints held by the Princeton University Library, along with other recently purchased holdings from Meyer’s collection, in particular, ten partbooks of Italian madrigals published by Gardano in Venice, acquired by the Library in 2013.